First time I see Joseph Stalin
he’s at the pool. He’s wearing
an old-fashioned one-piece swimsuit,
still has his trademark mustache.
He doesn’t stay long, dives in,
plays ball with kids for a time,
climbs out of the water, and leaves.
Next time I see Joseph Stalin
he’s in the grocery store, shopping.
There’s nothing in his cart but fruit.
Now he’s wearing a Seahawks jersey,
pair of jeans, and a big smile.
He bows his head at women
like each of them are royalty.
Right then, he’s a regular guy,
maybe someone’s grandfather.
But on one of my midnight walks,
I see him in his condo striking a woman,
spinning her face toward the window.
It’s a lady I used to see around a lot
before she took up with Joseph Stalin.
Now she almost never leaves her house,
like he’s created for her a tiny Siberia.
I anonymously call the police,
but nothing ever comes of it.
I don’t see Stalin again for a month.
Then he’s standing in my garden,
smiling his best phony smile,
admiring my heirloom tomato plants.
The woman stands two feet behind him.
He wants to know my secret.
After a long pause, long enough
for him to know I resent answering,
I tell him trick is to not hit women
and also to plant the stems deep.
Before he can answer,
the woman steps forward
tells me to shut my big mouth.
Stalin is a great man, she says,
not some nobody like me. 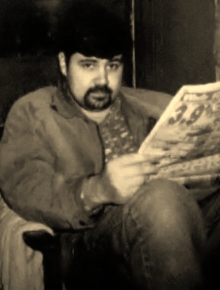 James Valvis has placed poems or stories in Ploughshares, River Styx, Arts & Letters, Hanging Loose, Natural Bridge, Wormwood Review, The Sun, and many others. His poetry was featured in Verse Daily. His fiction was chosen for Sundress Publication’s 2012 Best of the Net. He’s a recent finalist for the Asimov’s Readers’ Award. A former US Army soldier, he lives near Seattle.